YUKARI ART is pleased to announce that “Two ways towards…”, two persons exhibition by Akira YOSHIDA and Kazuharu ISHIKAWA will be held at ROPPONGI HILLS A/D Gallery （ROPPONGI HILLS ART & DESIGN STORE）from 10th of January thru 2nd of February, 2020.
The exhibition opens from 12:00 to 20:00 everyday and admission is free of charge.
(Opening reception on the 10th of January, 18:00 - 20:00)

Please come to visit the exhibition! 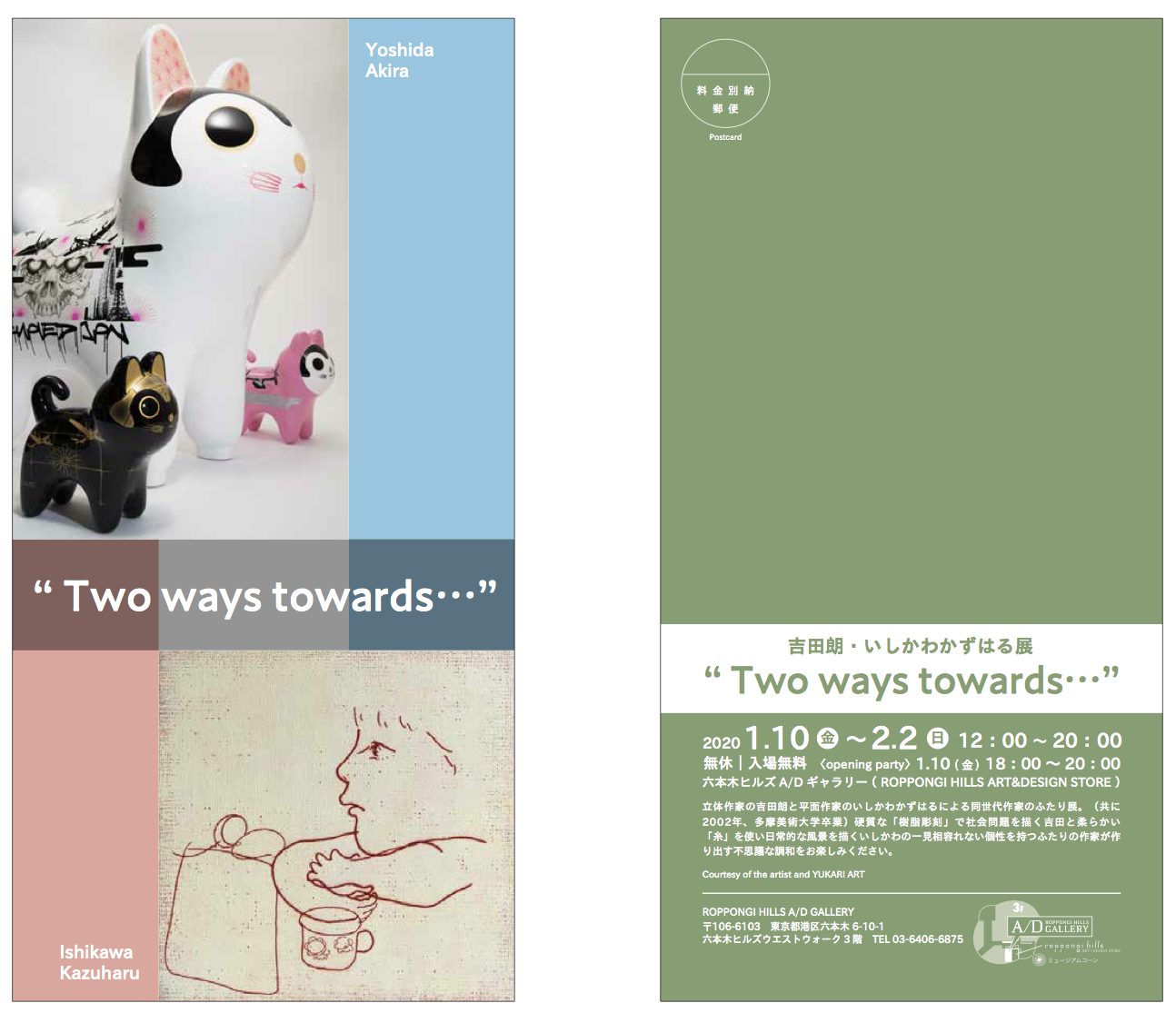 The two-person exhibition “Two ways towards…” consists of three-dimensional artist Akira YOSHIDA (Born in Kanagawa in 1976) and two-dimensional artist Kazuharu ISHIKAWA (Born in Nara in 1977) who will be presenting their works with two completely different expression of techniques and practices.

Alumni of Tama Art University (both graduated in 2002), the two have been close friends since their university days and have even exhibited their works at YUKARI ART. However, because of their art styles being so vastly different, they have never had the chance to present their works together in an exhibition until now.

Akira YOSHIDA graduated from Tama Art University as an undergraduate of fine arts, majoring in sculpture. He has primarily created three-dimensional works using FRP(Fibre-reinforced plastic) material with delicately airbrushed paint applied over. His works, which depict the problems and contradictions of modern society in a satirical yet graceful manner, may seem familiar and charming at first glance, but always contain a sense of irony that makes the audience thrilled. His works are permanently exhibited at City One, Station for Hong Kong’s largest railroad company (MTR), Nishi Ginza Chance Center (one of the most popular lottery stands in Japan) in Tokyo, and so on.

Kazuharu ISHIKAWA graduated from Tama Art University as an undergraduate of fine arts, majoring in oil painting, and is an artist who draws simple, everyday sceneries using “thread” , on not just canvas, but also on various surfaces like glass, outdoor walls and so on. The most popular works by the artist are the ones created on the outer walls of private houses in Naoshima island (Kagawa, Japan) which blend in and integrate into the atmosphere.

He named the project of traveling and creating works that fit a certain location “Journey of lines” to hope that his lines will transcend beyond generations and borders to connect the hearts of various people. His scope of activity is wide-ranging including a commissioned art work for TOYOTA , designing the cover of K. pop star album jacket, and so on.

While Yoshida mainly uses the hard FRP material in his hard plastic sculpture to depict social problems, Ishikawa instead uses soft thread to illustrate the warm sceneries of day-to-day event. At a glance, they might seem like artists with completely opposite form of artistic practice, however what they have in common is that they both try to convey the “Present” world that we are all currently living in, as well as a parallel of certain charm in their aesthetics, and softness in their forms.

The title of the exhibition “Two ways towards...” holds a meaning about not only “Beyond the two different production techniques” but also, “Creating an unknown new world by placing two artists in a single space.”

It would be a great pleasure to welcome you to this show of strange harmony, created by artists of the same generation with seemingly incompatible styles.

《Artist Commentary for this exhibition 》

I am producing two series of works, "Inuhariko" and "Inudaruma."
Both of these works are based on the relationship between Japan and the U.S. that forms modern Japan.

I drew peaceful moments that exists around me.
It is a collection of work that functions similarly to a diary, recording my little son’s growth.